Christian Hosoi, Tony Alva, Steve Caballero and Giorgio Zattoni. It’s not the X-Games legends roaster: these are simply the riders that participated to the most unbelievable session ever at the bastard bowl.

Hosoi, who’s always been the king of style , shows us he’s still in an incredible shape. He’s almost too good to be true. He rides as if time has frozen. Pure legend.

It’s that time of the year again when summer *** SALES *** pop up at the bastard store in Milano.

Sales start on Saturday, July 7, with 30% OFF on most bastard products and a special price on some models of Electric, Nike, Vans, DVS and Lakai. Together with our friends Bomboclat and Vans we are organizing the “Chiesa Iron War”.

Where?
At the Palù Park of Chiesa in Valmalenco, one of the most exciting italian snowpark of the last years .

When?
Saturday, February 18th, starts at 10 am until 5 pm. Don’t be hurry to come back home because at 10.30 pm starts the OFFLINE Bar after party, it could be a wild party…

What?
We’ll be shredding all day on boxes, rails and whatever the Palù Park shapers will make slideable.
An old school contest, no money, no ranking, but a large prize in products to enjoy this crazy and cold winter.
Rails, pole jams and wallrides. Fifteen minutes to shred every structure and immediate prize-giving to follow.
Grill’Em All BBQ and a large quantity of the unmissable Grill’Em All t-shirt only for the strongest.

Here is the video report of TWEDP 2011 contest that took place in Usmate and at the bastard store two weeks ago. We’ve beaten the rain!

Thanks to TheHardCheese for the video! On Wednesday, October 20th bastard store will host a Video Premiere for the Burn Skate Battle with the Vans, DC and Duffs italian teams. The winners will fly to California.

Seats are limited. For reservations write an email to lifestyle@connexia.com, they will reply for confirmation. Bastard store makes it to the Vans Shop Riot european finals once again. This last edition was held at the Wintherthur skatepark in Switzerland on Saturday, October 9th. For the second time in a row the bastard store takes first place at the italian Vans Shop Riot, held at the Jurassic Skatepark in Cesena for this edition.

Besides a 1000 euros cash prize Igor Fardin, Daniele Galli and Marco Lambertucci win tickets and accomodation for entering the european final of the Battle of the Shops. The Burn Skate Battle has started, this week with the Vans team.

Skateon publishes a daily report every night, in which you can see the challenges and the guys that think them up, like Gros.

Vans UK at the bastard bowl 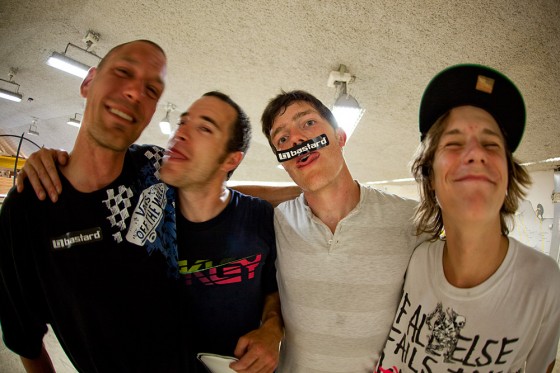 The four dudes above are Greg Nowick, Andy Scott, Josh Young and Jake Collins, aka the Vans team UK that ripped for two days straight the “Vans Off the wall spring classic” miniramp.

Having to kill some time before boarding their flight back to the UK out of Milan, they squeezed in a skate session at the bastard bowl delighthing us with their sweet british style.

Some time ago the producer of VBS TV Chris Gross came visit us, as he was collecting material to make a documentary on the history of skateboarding in Europe, and for the Italian chapter has asked us, among others, for some help.

Thanks to the support of Stefano Pomogranato and Vans Italy finally we can see all 5 episodes that narrate a part of our history, a part because clearly when the whole movement started, there were not only Milan and Rome, there was Turin with the Nelzi brothers, Zampa and Pantaleoni, Genoa with the Contati brothers, there was Verona with Ugolini and Tabacchi …
In these five episodes, very well done, we’re taken on a journey through the history and evolution of skateboarding in Italy from the origins to present times; from the first ollies to the golden years of Giorgio Zattoni, all the way to the bastard bowl, going through Milano Centrale.

The third episode is about the beginnings of the professional career of Giorgio Zattoni. Story told by Giorgio himself with a little bit of melancholy.

The last two episodes deal with Milano with tales from the Giordano bros, Jep, Max Bonassi and Gros.